In previous lives she was a political activist and business owner and remains an avid Planned Parenthood supporter. A graduate of Southern Methodist University, she holds a Master’s Degree in Creative Studies from the University of Central Oklahoma, where she received the Geoffrey Bocca Memorial Award for Graduate Writing.
​

​Janet M. Taliaferro writes novels, poetry, and short stories. In broad-brush terms, she has written about alcohol and drug addiction, and more importantly, recovery and the influence of twelve-step programs, incest, racial and religious tolerance, abortion, and war.

​In previous lives she was a political activist and business owner and has remained an avid Planned Parenthood supporter over the years. Janet graduated from Southern Methodist University and holds a Master’s Degree in Creative Studies from the University of Central Oklahoma, where she received the Geoffrey Bocca Memorial Award for graduate writing.

She was born and raised in Oklahoma City, and in 1960 Janet and her husband took their three children to Virginia while he had a 1-year assignment in Washington—they stayed for 15.

Returning to Oklahoma after thirty years as a political activist and consultant, she took over a family business. Then in 1984 her writing career began.

​Janet’s first novel, A Sky for Arcadia, was a finalist for the 2001 Oklahoma Center for the Book Award. She’s published a chapbook, Breaking the Surface; short stories and poems in The Northern Virginia Review, Fearless Book’s Touching, New Plaines Review, Deep Fork Anthology,Dream Quarterly International, and Tight; and poems on Robin Chapman’s Poem a Day Blog and Atticus Books Online.

​Janet is again living in Virginia and is a member of American Independent Writers and the Wisconsin Fellowship of Poets.

​Sheila O’Connor, Brooklyn born and convent educated, leaves the East Coast for her freshman year at college at Southern Methodist University. Her three suite mates are familiar with this new alien world, but none of them is prepared for the challenges Shelia will face. Her secrets will affect all of them before the year is out and continue to echo as the women meet for a 30th reunion.

They called us the “Silent Generation.”

​Our men followed the Greatest Generation into another bloody war after only five years of peace; the Korean War. Remember it? Nearly as many of us died there as in Vietnam, the Baby Boomers’ war.

​Our women bridged a culture our mothers had discovered—going to college, but returning home to hang a framed diploma in the family kitchen. We began life expecting to live the same lives until the world changed around us, and many of us chose to change with it.

Virgin Hall is a book about four women coming of age in the 1950s. The book is divided into three parts. The first part introduces the reader not only to the characters, but to the times. Clothes, sorority rush, boys, and a great date were all priorities for “co-eds” of the day. Sheila, the heroine, a sheltered girl from Brooklyn, is lost at first in the flamboyant culture of the Southwest. As her three suitemates help her adjust, the women establish lifelong friendships.

​The second part of the novel reveals the very real life situation Sheila faces. She is an incest victim and experiences a pregnancy from a rape, even as the pace of campus life goes on around her. Shelia is helped through her trauma by the other women and by the young man she considers her true love.

​Part three takes place thirty years later, at an impromptu reunion of the four college suitemates. They have all undergone changes in the intervening years, and answers to many questions raised in the first two parts come to light as they catch up on one another’s lives. America and the three women changed profoundly in the intervening years—all of them know that for every gain they made, a price was paid.

​Life in Different Times
​
At heart, Virgin Hall is a book about what the 1950s were like and all the rigid hypocrisy and misplaced priorities of the times. We were the last generation to reflect the mores, habits, attitudes, and cultural values that dominated American life over the previous century. Virgin Hall is also is the story of a kinder era, when the individual felt a duty to society at large, values that seemed to die off after the assassinations of John and Robert Kennedy and Dr. Martin Luther King Jr. in the 1960s.

​The good went with the bad for those of us living through the profound social changes of the times. I was proud to be a part of the civil rights movement, proud to be active in politics trying to elect progressive leaders, and proud to follow John and Robert Kennedy into what we hoped would be a new era. Martin Luther King Jr. spoke to and for many of us.

We had grown up in the days of lynchings, gentlemen’s agreements limiting what Jews could do, and suspicion of Roman Catholics that bordered on hatred. The only choice a woman had with an unwanted pregnancy was a coat hanger or a backroom, illegal abortion. No one mourned the passing of these societal defects.

Virgin Hall was inspired by my experiences and the women who lived on the third floor of the freshman dormitory Virginia Hall, at Southern Methodist University in the early 1950s. Naturally the boys called it Virgin Hall.

It is important to say this is not a roman à clef. None of these things happened to any of us. I have borrowed certain characteristics and details of background to create a pastiche of characters for the book. Purists of the time will recognize that I have taken liberties with the details of sorority rush and that Virginia Hall did not have suites like the other dorms. Other than that, I have stayed close to the truth of the time.

Women’s lives are continually bettered by access to healthcare and threatened by anti-abortion extremism. Before Roe v. Wade protected access to safe and legal abortion services, women of all social positions lived in fear of unwanted pregnancy. In Virgin Hall, the author remembers that fear and gives voice to the stories of women grappling with life-altering decisions.

Virgin Hall is a woman’s coming of age story set in the 1950s and offers a window into social and sexual mores of the times. Sheila, the heroine, a sheltered girl from Brooklyn, is lost at first in the flamboyant college culture of the Southwest. Clothes, sorority rush, boys, and a great date were all priorities for “co-eds” of the day. As her three suitemates help Shelia adjust to life in a new social world, lifelong friendships are established along the way.

Readers will learn that growing up then wasn’t all fun and games, even for sheltered young women of privilege. Sexual violence, racist norms, and limited access to healthcare and abortion took their toll, and the consequences reappear when the friends reunite 30 years later. If you appreciate finely wrought prose and an honest look at times gone by, Virgin Hall offers both a cautionary tale and a tribute to women’s empowerment.

In previous lives she was a political activist and business owner and remains an avid Planned Parenthood supporter. A graduate of Southern Methodist University, she holds a Master’s Degree in Creative Studies from the University of Central Oklahoma, where she received the Geoffrey Bocca Memorial Award for Graduate Writing.

A Sky for Arcadia 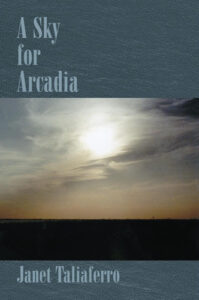 Set in the early eighties, this is the story of Mary Ann, who awakens from the nightmare of an attempted suicide to what she considers the nightmare of daily life and recovery from addiction. As the reader joins her journey, both demons and life-preservers make their appearance. Mary Ann’s path through the year begins and ends with her struggle to face life’s challenges and keep growing in spite of her deep wounds and sometimes tortured emotions. It is at once a novel of pain, perseverance, and strength—simultaneously compassionate and brutally honest. No matter what the reader’s background, Mary Ann’s story will resonate on many levels and linger long after the final page is turned.

In A Sky for Arcadia, you’ll meet Mary Ann as she first tries to get sober and then follow her through a tortuous first year. During that time she struggles to deal with crippling grief from losing her daughter in the time before the book begins. Meanwhile, her charming son is on a dangerous path and she seems to be the only one willing to recognize his peril. Her family, while a loving one, is not particularly helpful. They don’t know much about addiction or recovery and don’t really want to know about uncomfortable details or emotions. In addition, Mary Ann does a number of things she is told not to do, including getting involved with a man she hardly knows. The novel is set in 1984 amidst an economic downturn that threatens her livelihood as the owner of a small, independent bookstore, but she still finds new friends and some old acquaintances who see her though the ordeal. Mary Ann emerges from her year stronger, but with her own battle scars.

Janet wrote A Sky for Arcadia because as much as she admires fine works like Lost Weekend and Days of Wine and Roses, they are much more about the drunkalog, as it is known, than recovery from addiction. There are tons of tabloid stories about going to rehab, but few tell you what recovery from addiction is really like. The only people who even seem to be aware of the process or interested in it are those affiliated with any of the numerous other twelve-step programs. There are a few movies like “When a Man Loves a Woman,” which are focused mostly on what happens after one gets clean and sober, but not many, and most of these stories deal less with the recovery process than with the interpersonal fallout.

Novelists often speak of their characters coming to life and as Mary Ann’s story emerged in the writing, Janet became increasingly determined to share it with others. She eventually self published the novel and it was chosen as one of eight finalists in the Oklahoma Center for the Book Awards in 2002.

Breaking the Surface, a chapbook of poems written about the lake house in Northern Wisconsin where the poet spent summers in her youth and that she still shares with her family. They are poems of memory and place as well as encompassing the arc of a life lived.

​A Poetry of Place​

The summer of 1941 seemed a world away from the wars in Europe and Asia that would soon consume all of our time and attention. That July, while our family visited one of my father’s relatives in Michigan, my mother received a call that her father had suffered a heart attack in Minnesota. My parents chose the shortest route to reach him, and that route took us right through the North Woods of Wisconsin.

As we drove up US 51, we came to a bridge with a view of a blue lake, a long point nearly bisecting it, and many islands within it.

“I want a house on that lake,” Mother said.

Her statement found a home in Breaking the Surface, just as four generations of our family has found refuge, comfort, and a connection to nature in the house she wanted.

Breaking the Surface combines poetry about nature, human motivation, conflicts, and resolutions—all connected to the place we recognize as our spiritual home.